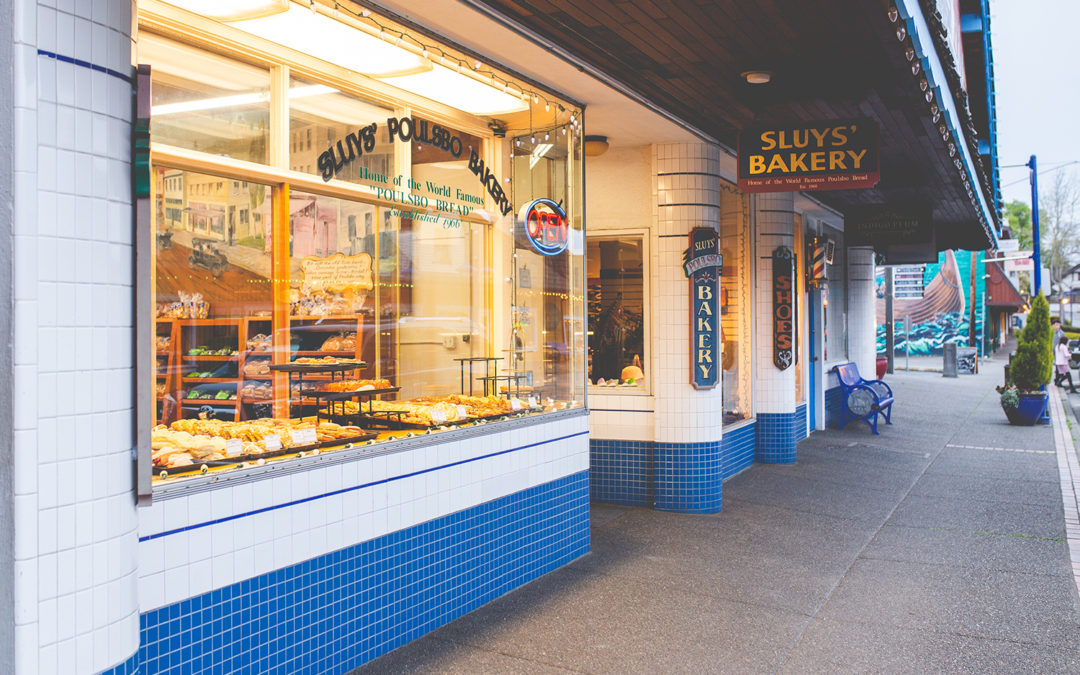 This month’s spotlight features one of the most iconic local businesses in Poulsbo, Sluys Bakery. Possibly one of the most well-known bakeries in all of Washington State, their famous Poulsbo Bread was sold nationally for years. No trip to Poulsbo is complete without a visit here. Locals get to the bakery early to beat the crowds and to grab their favorites before they sell out. They have a wide range of baked goods including traditional Norwegian pastries, donuts, breads, cakes and cookies. Some of the most popular items are the Viking Cups (a cinnamon bun made in “cup” form and filled with cream cheese frosting), their Viking Donut – a super-sized chocolate glazed donut, and a favorite of the little ones, the Dough Boy – a donut shaped like a gingerbread man. Whatever you choose, you really can’t go wrong here.

Dan & Stephanie Sluys currently own and operate the bakery, a family business for the past 53 years, started by Dan’s father. Stephanie filled us in on a little more history of the bakery,  and some interesting facts a lot of folks may not know. Enjoy!

How long have you been in business:
53 years on May 30

What was the inspiration to start this business?
Marion Sluys, a baker in Bellingham, came to Poulsbo with his wife, Loretta, and children on a trip and thought Poulsbo was beautiful. Marion met with Edith ‘Babe’ Schaeffer, owner of Bauer’s Bake Shop downtown Poulsbo, inquiring to purchase the bakery. Babe was a little reluctant to sell the bakery as she had sold the bakery 3 times previously only to receive it back again from the purchaser as the reality of the baker’s life started in for them. Babe was impressed with Marion and the quality product he produced so she sold him Bauer’s Bake Shop. Together Marion and Loretta developed Sluys Poulsbo Bakery and, along with their Son, Dan, built what it has become today.

What do you love most about doing business in Poulsbo?
We love the Poulsbo Community where everyone contributes to a common goal of making Poulsbo the best place to live. There is a lot of community involvement in Poulsbo with different events, fundraisers, activities, etc. Those all take people coming together, it doesn’t just happen by itself. It’s great to be in a town that is active and alive!

We, also, love our regular customers that come in to the bakery daily for their donut, the families that came here as children and are now bringing in their children or grandchildren, or the visitors that come to Poulsbo and walk into the bakery for the first time. The expression on their faces is priceless as they smell the scents of bakery. We are truly honored and blessed to be a part of so many people’s memories of the past as well as the ones they are making today.

What’s one thing visitors to your business might be surprised to know?
All of our product is made from scratch and by hand. All of our donuts are hand cut and fried in small batches, currently on weekends we are producing upwards of 5,000 donuts a day, plus all of our bun dough and pastries.

“Giv Os idag Vort Daglige Brod” above the backbar means “Give Us This Day our Daily Bread” in Norwegian.

Anything else you’d like to add?
In 1974 Marion developed Poulsbo Bread, which is a forerunner to the many multigrain breads you see on the market today. Marion sold the recipe rights to create a mix for Poulsbo Bread to the Lucks Company, which became Franz Bakery, with a contract that while the mix was being produced, Sluys Poulsbo Bakery was the only place that could make it from scratch. Poulsbo Bread was produced and sold in grocery stores from 1980’s to 2010 when the contract did not get renewed on our end. We are currently the only bakery that makes Poulsbo Bread and makes it from scratch, grinding our own seeds. in 1988, 20 million loaves of Poulsbo Bread were sold across the United States by Lucks/Franz Company.

Visit them next time your in town, or online at https://www.sluyspoulsbobakery.com

A special thanks to Brittany Kelley Photography for providing the images to accompany our article. 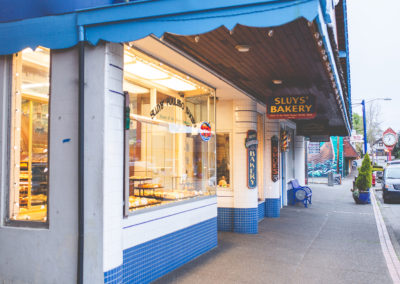 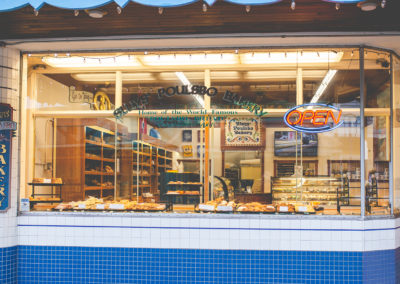 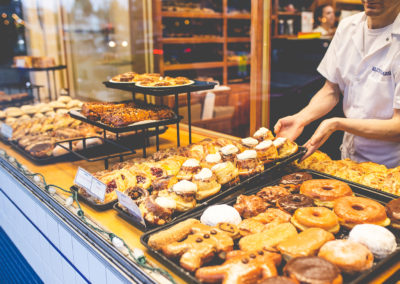 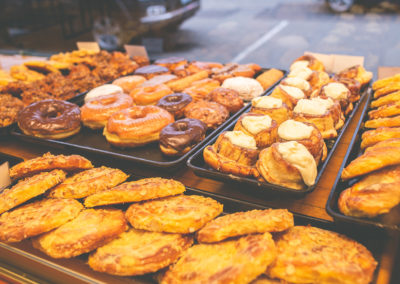 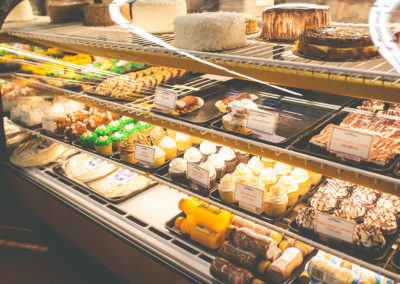 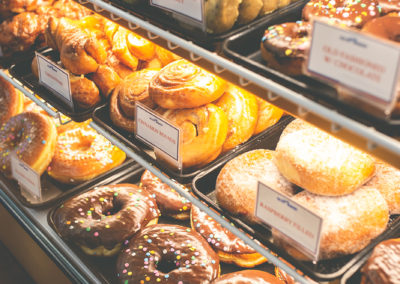 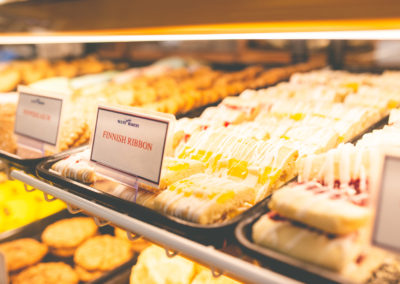 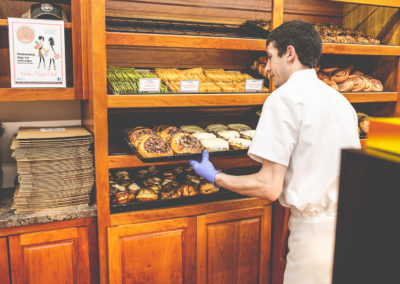 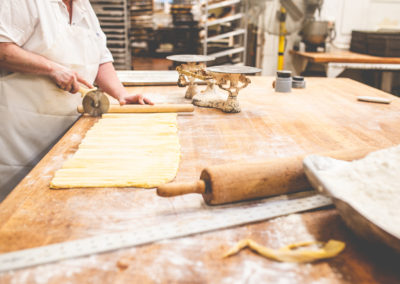 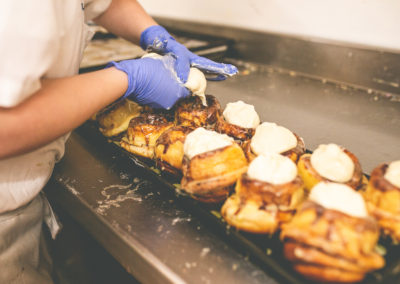 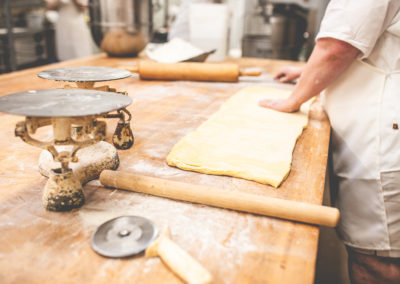 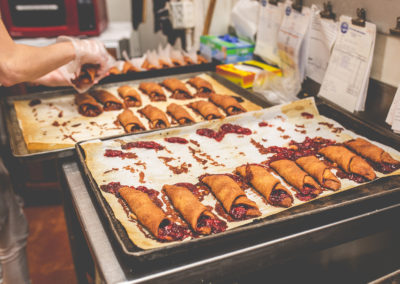 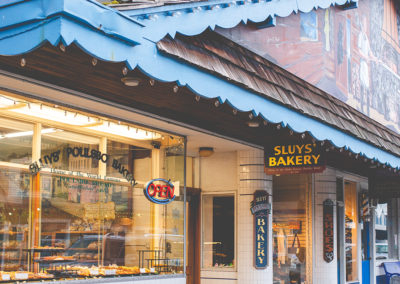