The Afters with Jason Gray and Jonny Diaz 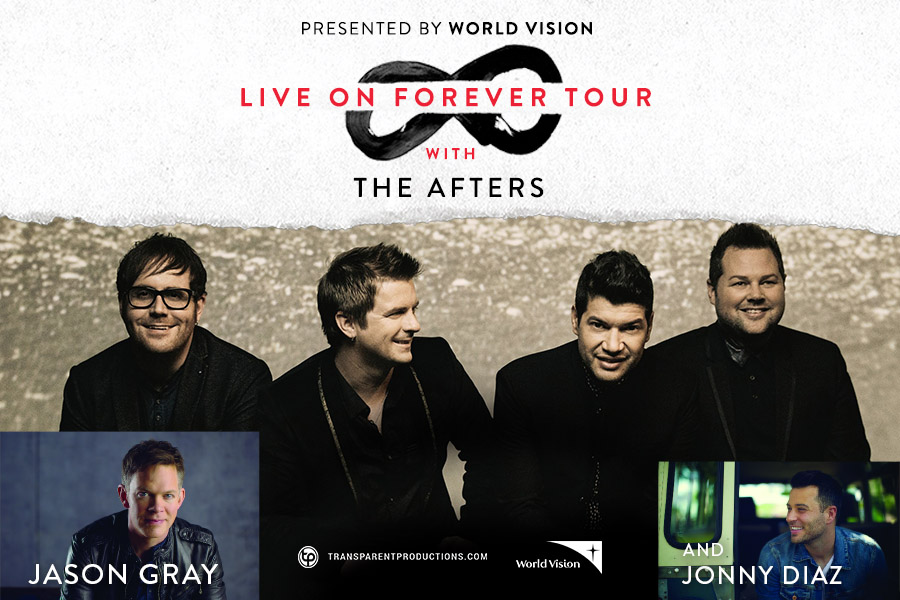 Dove-award winning band, The Afters will be hitting the road this February alongside Jason Gray, bringing their ‘Live on Forever’ tour along the West Coast with 10 tour stops in California, Washington, Oregon, Nevada and Arizona.The tour will be in support of The Afters fifth studio album of the same name, Live on Forever, which debuted September 2016 after the album’s title track hit top 5 on the Billboard Christian Hot AC charge and top 10 on the Billboard National Christian Audience chart. The album also features the band’s single, ‘Battles’, which made its way to the top of the charts this Fall. Since the album debut, The Afters have been on the road for the nationwide “Love Riot Tour” with GRAMMY-nominated band, Newsboys. Jason Gray most recently spent two months touring across the U.S. with Josh Wilson & JJ Heller. His latest album ‘Where The Light Gets In’ made it’s way to Number 5 on Billboard’s Top Christian Albums chart in July, and his hit song ‘Sparrows’ saw heavy support on Christian radio stations across the nation. “We’re planning some really special things for this one,” says Josh Haven of The Afters. “It will be our best yet, and we’re looking forward to having Jason Gray and Jonny Diaz out with us for these nights.” We hope you can join us for these shows – they are going to be truly amazing evenings of music & ministry!